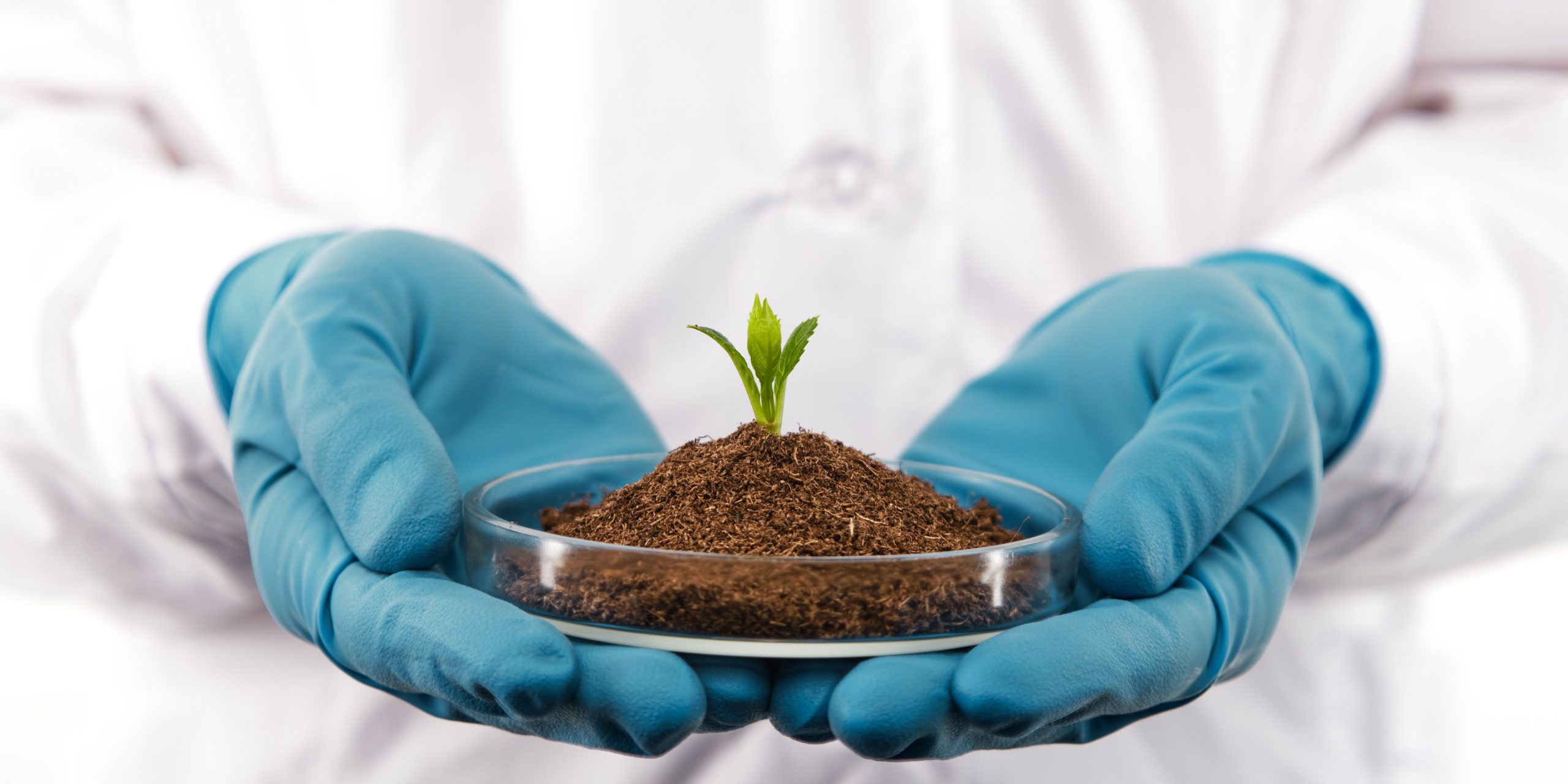 To re-invigorate safety culture at the UBC Okanagan campus, Health, Safety & Environment is hosting a pilot Lab Safety Expo that caters to the health and safety needs of research and lab personnel. The main event is tie-dying lab coats. 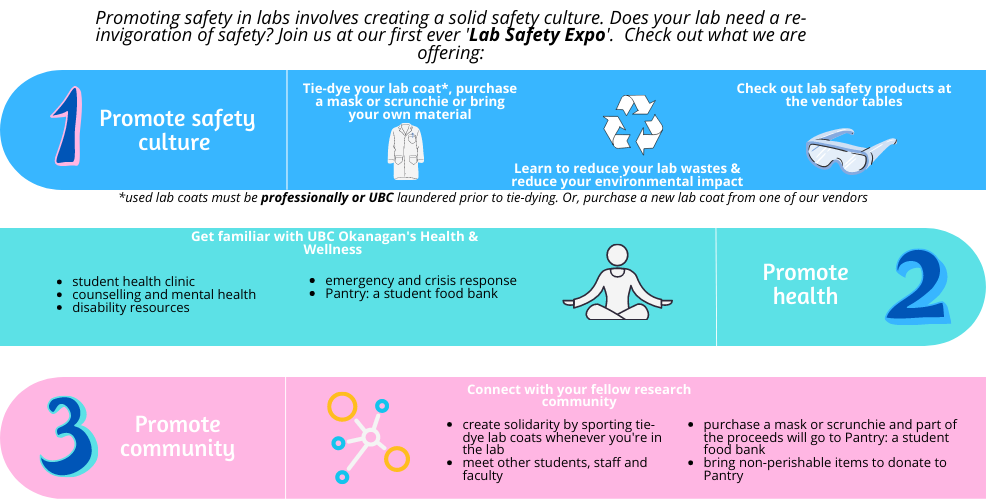 Lab faculty, students and staff participated in our “Hazardous Waste Sort It-Out” challenge on February 7th to learn about proper waste segregation at the Okanagan campus. By segregating properly, labs can ensure that hazardous materials are kept safe and secure, while recyclable materials are given new life in our recycling streams.

Those who successfully completed our challenge were entered in the draw for greener alternative lab supplies and equipment. The winners are: 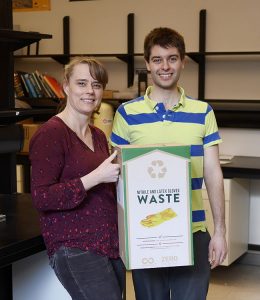 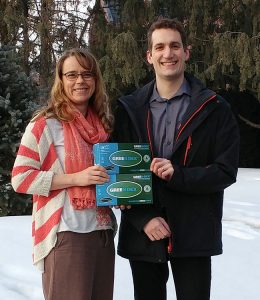 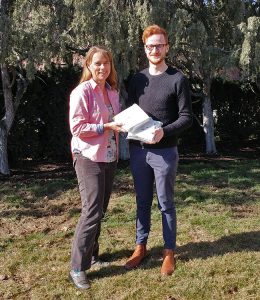 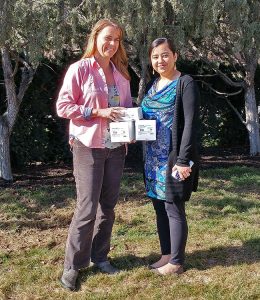 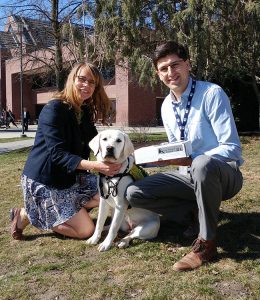 Robert Godin of the Irving K Barber School of Arts and Science – Chemistry is presented with a TerraCycle glove recycling box in our pilot glove recycling program. The community looks forward to seeing if glove recycling can be successfully undertaken at the UBC Okanagan campus.

Julien Gibon is receiving biodegradable gloves on behalf of the Barker lab.

Adrian Monthony is member of Dr. Susan Murch’s lab. He is being presented with Manilla hemp low-lint lab wipes. Hemp is a more sustainable paper source than conventional wood based paper due to the time needed to produce hemp fibers. Hemp also requires less energy and less bleaching / chemical treatment in production than conventional wood based paper. We will be looking forward to hear how the hemp based paper performs in the lab.

Biological technician Geet Hans is presented with paper weighing boats. These weigh boats will be used in the undergraduate teaching labs to replace conventionally used plastic (polystyrene) weighing boats. The new paper boats are made with unbleached renewable paper. The plastic weigh boats are more environmentally impactful as they are made from a non-renewable resource. While the plastic weigh boats may take hundreds of years to breakdown in a landfill, paper can be broken down into its biological components within a year.

Jeff Therrien, from the Department of Chemistry, is presented with Lab Armour beads by Cherie Michels and PADS Meeka. Lab Armour beads are replacement for water and ice in heating and cooling baths. Because the beads are cleanable and autoclavable they can be reused indefinitely. In contrast, a water or ice bath may be filled and dumped many times in year resulting in a drain on water resources and an addition to wastewater streams. Users of these beads also report less accidental spills in their heating and cooling baths as the lab armour beads are less likely to cause tipping of tubes and flasks. These beads will be used in the undergraduate chemistry labs which further inspires students every year to minimize the impact of their education and research.

The Green Research Advisory Committee held a retreat in November 2012.  The primary areas of concentration would be in reduction of energy use, protection of water resources and engagement of the larger University community.  This group aims to take existing resources, information and program and spread it to all members of the campus community in a targeted manner: from chemistry through to fine arts, and from a first year undergraduate to the tenured researcher.

Whether you're new to the concept of green research or looking to enhance your knowledge of environmental sustainability in the lab, the Green Research Workshop is for you.

The 2011 workshop's focus is on wastes and how we can reduce, re-use or turn them into resources.

Formal presentations, research posters to read and trade-show booths were available to browse.

Offered in the fall each year, the Green Research Workshop provides UBC faculty, staff and students with information about green research practices, products and services.

The Green Research Workshop offered on October 28, 2010 was a success.  It offered attendees the opportunity to learn hands-on how to develop a lab-specific, waste-minimization plan and to discover practices, products and services available to reduce water consumption and save energy in the lab. The Green Research Workshop was a live interactive webcast.  The Okanagan campus' contribution to the webcast was titled Real Options for Lab Stewardship Okanagan Campus presented by Judit Moldovan, Laboratory Manager for Irving K. Barber School of Arts and Sciences Unit 3, and Caitlyn Liberto, summer student. 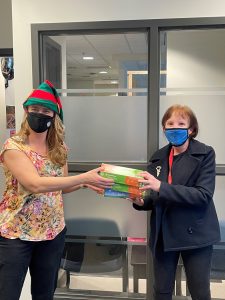 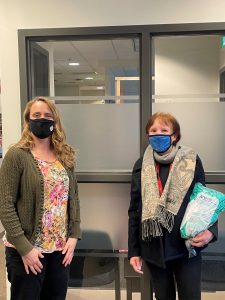 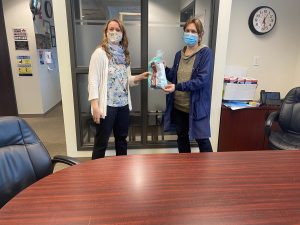 Cornwell and Porteous were recognized at an award ceremony during the Campus Operations and Risk Management Pit Stop on March 21.

Cornwell, a third-year civil engineering student, earned $200 and top spot for his submission: Where does it all go? His work will appear as information pieces in studios, laboratory sinks and other waste disposal areas across campus starting in April.

Porteous, a second-year visual arts student, was selected for second prize. She earned her $100 for her work, which will be used in online promotions to help educate the campus community about responsible disposal methods for fine arts materials.

The Responsible Disposal Poster Contest was organized by Health, Safety and Environment with support from the Faculty of Creative and Critical Studies and the Green Research Advisory Committee.